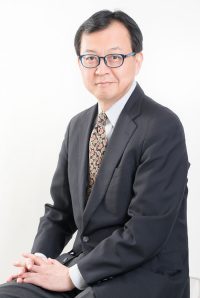 Born in Tokyo in 1957 and currently lives in Yokohama

After working as a hardware engineer at Ricoh, where he developed new products such as digitalized copiers and proprietary semiconductors, he was headhunted by an American semiconductor company. There, however, he learned the Western-style development process, but faced many problems due to the Japanese way of working and the Western-style contract-based way. He realized that the Japanese way of working is not acceptable in the world.

While working with Japanese companies on the side of American companies, he has successfully led multi-national teams of engineers from the U.S., Europe, China, Taiwan, and other countries to complete projects such as LCD TVs, communication devices, and in-vehicle devices, using his unique management style that combines Japanese and American cultures.

Then, he has been engaged in the management of small and medium-sized enterprises in Japan, and has learned firsthand about the compatibility between management and strengthening development organizations, and has evolved his management style to incorporate business administration.

Later, he returned to a Japanese company as a development manager, where he implemented organizational reforms to face real challenges with engineers in the field, and contributed to the sales growth of two product business units in three years by providing new technologies for the development of several non-core product groups that had just been launched.

He is working hard every day to revitalize the Japanese manufacturing industry through his unique method that combines his own know-how born from 30 years of experience in Japan and the U.S., lean product development that he has learned and practiced over the past 30 years, TOC (Theory of Constraints), job theory, and various management theories that he has gained from his experience in corporate management.

Columns on this site

The Path of a Manufacturing Engineer